This was our first of three years at the same conference site. Program Chair for the meeting was Michael K. Schoenecke, and Lynnea Chapman King served as the conference host. The Sheraton Oldtown Hotel provided a wonderful ”tent“ for the meeting, and the luncheon proved to be a big success because it was included in the registration fee; people therefore felt obliged to attend. We used a Best Western across the street for spill over, but the managers there set up a shuttle bus for participants to get back and forth between the hotels; people staying at the Best Western also received free shuttle service to the airport.

The speaker at this year’s luncheon was detective fiction writer Steve Brewer who writes the ”Bubba Mabry, P.I.“ mystery series. Rudolfo Anaya, hailed as the Godfather of Chicano literature in English, read from Shaman Winter and spent hours talking with interested conference participants. Better than 400 participants from around the world enjoyed the scenic charm and warm temperatures of Albuquerque and its Oldtown Section.

The Holiday Inn at Lubbock was the location of the annual meeting with hosting shared by Jill Talbot and Lynnea Chapman King and with Michael K. Schoenecke as supervisor. The Texas Tech Press mounted an impressive display of books, banners, and flyers; the journal Film & History was also represented. (See website: www.filmandhistory.org)

Again, the speaker was Brother Paul Somerville whose wit and wisdom are part of the Will Rogers satiric tradition. The Center for the Study of the Vietnam Conflict provided participants with a tour of its (then) new facility. Oral history collections, paper collections, relevant books, and films were all shown to those on the tour—including films such as Television’s Vietnam: The Real Story (1984) and Television’s Vietnam: The Impact of Media (1985), generously donated by Peter Rollins. The Vietnam veterans and scholars among us were very impressed by the opportunities provided by the resource center. (The famous Douglas Pike and his collection of original materials are now at the Center – the documents for study, and Pike for wise counsel and guidance of scholars.)

(in conjunction with the national meeting)

We met jointly for the second time in our organization’s history with the National PCA/ACA groups at the Marriott Rivercenter Hotel in late March. The joint meeting was the largest to date featuring such areas as Native American Studies; Media Bias & Distortion; Slapstick Comedy; Madness in Literature, Southwestern Literature; and more. Pat Browne scheduled us for wonderful rooms at the hotel, and a special luncheon was held for President Mario Herrera in the main dining room. The PCA/ACA also had a special event to honor Marshall Fishwick, one of the founders of the PCA and the recipient of the ACA’s Ray and Pat Browne Award. These joint meetings allowed scholars from other regions to sample the subject areas and work of the Southwest/Texas PCA/ACA, and we are thankful for the opportunity.

Hugh Foley again provided the organization for this meeting while Peter Rollins supervised and took most of the credit. The luncheon speaker was Brother Paul Somerville, the Dean in Exile of Morningside College in Iowa. Somerville, a gifted observer of the contemporary scene, was appreciated by the members – especially his satirical treatment of political correctness, campus sensitivity crusades, etc. Ray and Pat Browne were in attendance and added their insights to sessions and receptions. We always appreciate their concern with regional meetings and prize the lines of communication and support they have provided over the years.

With Hugh Foley as general chair and Peter Rollins as host, this meeting in the Student Union of Oklahoma State ran smoothly and demonstrated that book displays could enhance our regional meetings. The meeting was once again a decided success with Jack Bender, the artist for the comic strip Alley OOP! giving an overview of the history of comic strips and the evolution of his newspaper comic strip. The Student Union provided excellent facilities for receptions and supplied an audiovisual staff which was always helpful. The meeting went like clockwork, and the parties were wonderful opportunities to chat, tell stories, and listen to guitar music and song.

Our meeting in Waco was enhanced by Baylor University’s proximity to some cultural repositories. On campus was the ”high culture“ display of the Browning Collection, artifacts and manuscripts pertaining to the life and letters of the British poets Elizabeth Barrett Browning and Robert Browning. This collection provided a spectacular experience and many at the meeting took time to visit the Dr. Pepper Museum where we learned the secret formula of this potent elixir, created in the 1920s to compete with Coca-Cola – and fairly successful in that goal in Mid-America. (The secret ingredient is prune juice.)

As was often the case in these years, Michael T. Marsden took time to visit the region and to deliver a message about the place of Popular Culture Studies in the Humanities. His sage observations were appreciated by all as were his efforts to join us in our activities. Marsden did us all a favor by bringing greetings from the national to our frontier door. The local arrangements chief, Greg Garrett, did a fine job of putting the Waco meeting together. Garrett (graduate of Oklahoma State) thrived at Baylor and produced award-winning essays on motion pictures and novels as well.

This meeting was hosted by Joe Graham (Department of Sociology at Texas A&M-Kingsville) and was the most southerly of our meetings over the years. On the interstate which ran a due-Southerly course toward Mexico, we could see loads of cars being transported as agricultural products headed North toward the U.S. just coming out of the winter. Little did we realize that, later, NAFTA would turn this trickle of commerce into a flood. This campus location allowed the students of folk culture studying under Joe Graham to shine; everyone was impressed by the unique fieldwork and insightful reflections being made by many back-to-school, adult students in Graham’s classes. According to Peter Rollins, ”Joe was a much-loved mentor to these wonderful students.“

Under the superb leadership of Diana Cox (Amarillo College), the regional meeting gathered in February at the Ramada Inn. A reception at the Quarterhorse Museum in Amarillo added to the flavor of the meeting and its proud cowboy heritage. The car tour of Palo Duro Canyon gave participants an idea of the West Texas beauty that once captured the imagination of Georgia O’Keefe. The Amarillo meeting, mostly due to the wonderful planning of Diana Cox, now Professor Emeritus, had a special Texas flavor which we have never matched.

(in conjunction with the national meeting)

The regional meeting was held this year in conjunction with the national gathering in San Antonio, Texas. Texas President Robert Wylie (Amarillo College) and Southwest President Harold Hatt (Graduate Seminary, Phillips U of Enid) were assisted in putting out the call for papers by the Newsletter Editor, Mary Gill (West Texas State). One hour of academic credit at the 4000 level (both graduate and undergraduate) was offered to those who signed up through Oklahoma State and paid for the credit hours. A few books and a log were required components of the credit option; the graduate students were expected to do more writing for the assignment and to demonstrate a higher level of sophistication. Some twenty (20) completed the credit option.

Lawrence Clayton (d. 2001) acted as the host for this excellent meeting near one of the B-1 bomber bases of the U.S. Air Force (Dyess Air Force Base) and the home of Hardin-Simmons University. Clayton, a man fond of a good Stetson and bolo tie, was a special person to this organization because he set an excellent example for the organization in the area of graduate student support. He worked with the students, developed their presentation skills, and chaired their sessions, assuring that the AV was in place and that the setting was perfect for his hard-working novices. Peter Rollins notes that Clayton ”was an academic counterpart of John Wayne – we will live in the shadow of his memory, and will try to live by his example as a teacher.“

It was at this meeting that the Creative Writing Section really took off. It has been a major contributor to our meetings ever since, due to the excellent leadership of Jerry Bradley. Other novel areas included War Veterans & Events; Publishing Workshop; Texas-Mexican Religious Folk Art; and Advertising. A flyer for this meeting advertising the area titled ”America’s War Eras“ features a photograph of Peter Rollins among others participating in an amphibious landing at DaNang Harbor in 1965. Other OSU participants taking leadership roles at this meeting were Reed Harp, Darin Cozzens (both of whom helped with the Proceedings), and Kurt Hochenauer. As was true for so many of our meetings, old friends and good neighbors joined in true, regional fellowship.

Presidents Jeanne Ellinger (Southwest Oklahoma State, Southwest PCA) and Kenneth Davis (Texas Tech, Texas PCA) convened the 1988 meeting of the regionals in the Student Union of Oklahoma State University, a favored location for our meetings over the years – even after separation of the regional sessions from the OSU Filmathon, which had supported the regional meetings fiscally to get them going. Innovative topics for the meeting included Textile Arts; Quilts & Weaving; Traditional Games; Religion in the Bible Belt; Texas Fiddlers; Social Images & Definitions of the West; Graffiti, Rituals, & Superstitions; Heroes; and Melodrama. Participants also enjoyed the Western Image Film Festival, which included a gamut of films from Shane (1953) to The Trip to Bountiful, at that time a new film. 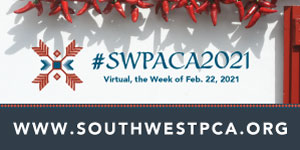